George Floyd allegedly tried to use a counterfeit $20 bill. Rayshard Brooks was blocking the drive-thru lane at a fast-food restaurant. Atatiana Jefferson was at home with her eight-year-old nephew. Aura Rosser was at home. Stephon Clark was standing in his grandmother’s backyard holding a phone. Botham Jean was at home eating ice cream. Philando Castille was pulled over for a traffic stop while his girlfriend and her four-year-old son were in the car. Breonna Taylor was asleep at home in her bed.

What do all these individuals have in common? They were Black people wrongfully shot by police officers in the United States.

The murder of Floyd caused an uproar around the world back in June, and since then, many more cases have been talked about, such as Taylor’s case.

Taylor was a 26-year-old  EMT and aspiring nurse who was shot to death in her own home on March 13, in Louisville, Kentucky.

When the case went up against a grand jury in Louisville, the outcome was that none of the officers involved were charged with her murder. Only one officer was charged for shooting into another home that had people inside.

Samantha DeFreitas, an activist located in Kitchener, shared her thoughts about the murder and the outcome of Taylor’s case. 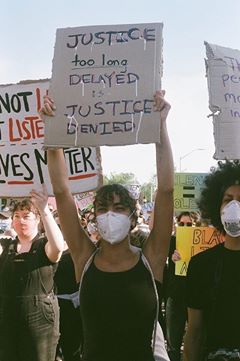 Photo: Samantha DeFreitas at the protest in Kitchener at Victoria Park in June.

The protestors are using their voices and fighting to be heard. Many activists feel as though their voices are being silenced just as they were decades ago, with no progress being made.

“It’s more than 60 years of the same problem being fixed with band-aid solutions. It’s frustrating to watch people from 10, 20, 50, 100 years ago plead for the right to simply live, but to this day we’re still seeing racism,” said DeFreitas.

Since that time, society has created ways to use our voices that don’t require going out onto the frontlines to protest, such as using social media.

“The Black lives matter movement brings me pride. I like to think of it as my great grandparents were Black, and their voices mattered, but they were limited. Now we have social media platforms and technology to express our opinions and share our thoughts,” said Taylor Bowden, an activist in Paris, Ont.

Regional Waterloo Police spokespeople and retired police officers were contacted but were unable to provide their opinion on the topic.