Indigenous people have been coming together for centuries at pow wows to dance, sing, drum, pray, and heal. Pow wows have grown in size over time and they provide a space for Indigenous people to connect with their culture and identities, including many people who were not able to do so when they were young.

“I’m an intergenerational residential school survivor and I’m also a Sixties Scoop survivor,” said Marie Pelletier, a dancer at Waterloo’s pow wow on Sept. 24. Pelletier didn’t get to learn about her culture as a child.

She describes how her twin brother sparked her interest in learning more about their culture when he invited her to a pow wow in Toronto about 25 years ago.

She can still clearly remember the sound of the drum that day. At pow wows drummers sit in a circle around a large drum and play a beat together that intentionally resembles the sound of a heartbeat. For Pelletier that sound “immediately stuck with me and from that day forward I wanted to learn more and more about my culture, everything that was stolen from me and my people, and so I’m learning it today because I’m now a Nokomis, a grandma, and I want my granddaughter to continue with our lost culture.”

Jerry Wayne Cleland, from the Swan Creek Black River Tribe of Anishinaabe, traveled from Michigan for the Waterloo pow wow. He danced in traditional regalia, which was spread carefully across the picnic table in front of him. He agreed that the importance of pow wows lies in the impact on children.

“It’s always good for the children, good to see them dancing too,” says Cleland, because pow wows instill pride and confidence in Indigenous children. “That’s the most important thing for me, is that they carry that on. It helps them in their lives.”

Cleland highlights the profound impact that dancing at pow wows had on him as a child. He thoughtfully describes how when he was growing up there were lots of Hispanic and African American children who seemed connected to their cultures but he felt disconnected from his culture and like the “only Native kid there.” 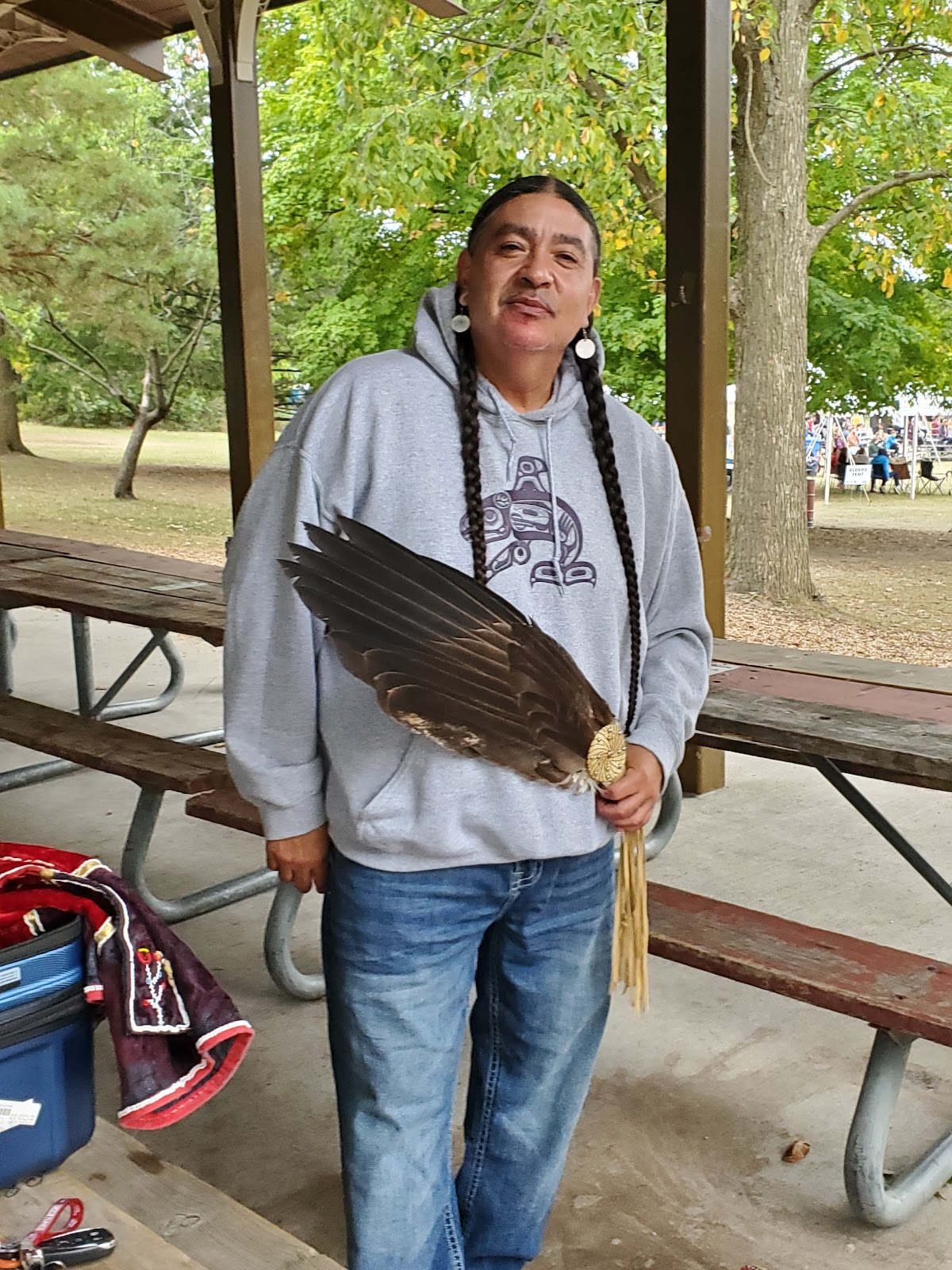 Jerry Wayne Cleland, with his long dark hair in two braids, holds a feather fan after removing his regalia and makeup once finished dancing for the day on Sept. 24.  Photo by Robin George

“I didn’t start dancing until I was 12 so I didn’t quite know where I fit in, but it gave me my identity,” said Cleland, reflecting on memories of his first pow wow at Hazel Park, Michigan in 1981. “Once I started going to pow wows it helped me.”

Cleland explains that as a teenager growing up in Detroit, Michigan, access to pow wows helped keep him out of trouble. “It saved me!”

Cleland feels fortunate for having “parents to take me to pow wow. Not everybody has that, and that’s disheartening.”

Pelletier says that pow wow dancing is an opportunity for healing.

“When we dance we pray and when we pray we heal. We not only heal for ourselves today but we heal for the past generations, our ancestors who weren’t able to heal during their time on Mother Earth.” She adds that pow wow dancing is healing for “our future generations too.”

Cleland explains how when you enter the dancing area at a pow wow “there’s not supposed to be any anger in that circle. All that’s left out here,” he says, gesturing at the space away from the pow wow. “They say people go and they get away from everything. That’s how it feels, like you are getting away from everything.”

The Waterloo Indigenous Centre hosted their annual pow wow on Saturday, Sept. 24, drawing many Indigenous and non-Indigenous people to Waterloo Park. Pelletier describes pow wows as reunions where “everybody comes from everywhere. People you haven’t seen in so long. A pow wow is where you will find everybody.”

“When non-Natives come to enjoy this,” Pelletier gestures to the dancers and the crowd watching, “that’s just a very good step towards reconciliation.” She describes the feeling of being at a pow wow as “unbelievable. My heart is so warm.”

Cleland reflects on how pow wows have changed over the years.

“Back when I started dancing the pow wows were real small. There wasn’t a lot of people out powwowing,” he says, “but before that they were even smaller.” Cleland says it’s good to see how pow wows have grown, and describes how some pow wows have between 1,200 and 1,500 registered dancers. “That was kind of unheard of back in those days. It’s important.”

Cleland also warns that going to pow wows can become addictive, describing how a lot of people “go to 30 to 40 pow wows in four or five months; they just keep going and going and going.”

This isn’t possible for him because of his work, but he smiles warmly and assures that “if I could, I would, you know.”